Got some News to share, then let us know…

The challenge is based on Trial Magazine “Everest Anywhere” mixed with our previous “Million Metres of Mountain”, taking the best bits from both!
The challenge will start on 1st Jan 2019 and will be open to all NMC full members, full details of the challenge and the rules are attached.
There will be a prize for the winner, which will include the prestigious “Reach For The Skies Trophy” and a Â£50 Cotswolds Gift Voucher!
Hopefully the challenge and rules are clear, however, I am happy to answer any questions over the coming weeks. Looking forward to hear about your adventures in 2019.
Dorian (NMC President)

A link to the rules is here

This January, Newbury Mountain Club members have made a wonderful donation to the local homeless people supported by the Newbury Soup Kitchen helping those in need or simply those with nothing to get through the cold weather and get back on their feet. Here is a message of thanks:

“Thank you to Andy and the rest of the donators from newbury mountain club for the generosity they have show the users of newbury Soupkitchen at the Salvation Army. You have given us so much high quality stuff such as sleeping bags, two hole big bags full of clothes, socks, jackets etc to both men and women, flasks and many more usefully things.
So thank you from the bottom of our hearts.”

See more details about the soup kitchen here and remember you can still continue to donate any unwanted outdoor gear via their website or contact a NMC member:
newburysoupkitchen.org.uk/updates-and-latest-news

Million Metres of Mountain (MMM) challenge
In 2016 Newbury Mountain Club was be 25 Years old and to celebrate we have set the club members a challenge to climb a million metres of mountain (MMM) by totalling the heights of all mountains and hills that have been summitedâ€¦.
It was a close thing but on the last club trip of the year to the Lakes we were able to clear the 1m metres mark with a big final push so well done everybody!!!

When the challenge was set, the aim was to increase trip participation, build team spirit through having a shared goal and to encourage individuals to push themselves a bit harder than they normally would. This was a lot tougher than expected, made so by the 50,000m cap, which ensured the objective wasnâ€™t achieved by 1 or 2 heroes.

The Wainwright Challenge
In June 2014 Steve Birkinshaw broke the Wainwright record, completing all 214 summits non-stop in 6 days, 13 hours. In May 2016, Alan and Claire completed the challenge, having taken 5 years and 1 month! But bearing in mind this was achieved in 3 or 4 weekends per year, we gave them a miss (usually) in foul weather, and weâ€™re slow walkers not fell runners, thatâ€™s not too bad really.
It is a realistic challenge, and many of the summits have been completed on club weekends. During the first year we didnâ€™t even know we were doing the challenge, but after a club weekend in December 2011 we noted that we had done 33 in that year without realising it (on just 3 club trips), so the challenge was on!
It has been fun planning weekend trips around tackling as many new ones as possible, which has taken us to many parts of the Lake District we had not been to before or even considered walking in. In 2015 we spent August bank holiday in some of the remotest parts in the NW and hardly saw a soul. To make it feel like a challenge we did push ourselves, by taking on an extra peak or four to what would normally be considered on a day walk (continuing on whilst our companions headed back to base), being out for long days, particularly if the weather was fine. Sometimes this involved some crazy routes that you wonâ€™t find in a guide book! Amazingly, on many of these days, other club members happily came along too for the extra peaks. On other occasions we have backpacked and had wild camps in some stunning locations.
Along the way we have met many others taking on the challenge, some doing it for the third or fourth time. There has also been the odd disagreement with other followers about which cairn is the true summit, with much waving of maps and books! It does help if you check with AWâ€™s very entertaining pictorial guides.
Having completed all the Wainwrights, it doesnâ€™t mean we are no longer interested in going to the Lakes; there are many areas we want to go back to via different routes or in better weather, and there is the small matter of the 110 outlying fells, which we intend to do â€“ these are mostly in areas we havenâ€™t yet walked in which will probably be empty of other walkers.
We therefore thoroughly recommend it â€“ so if youâ€™re interested, get a Wainwright map and start ticking them off… 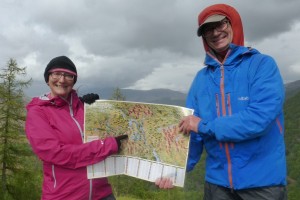