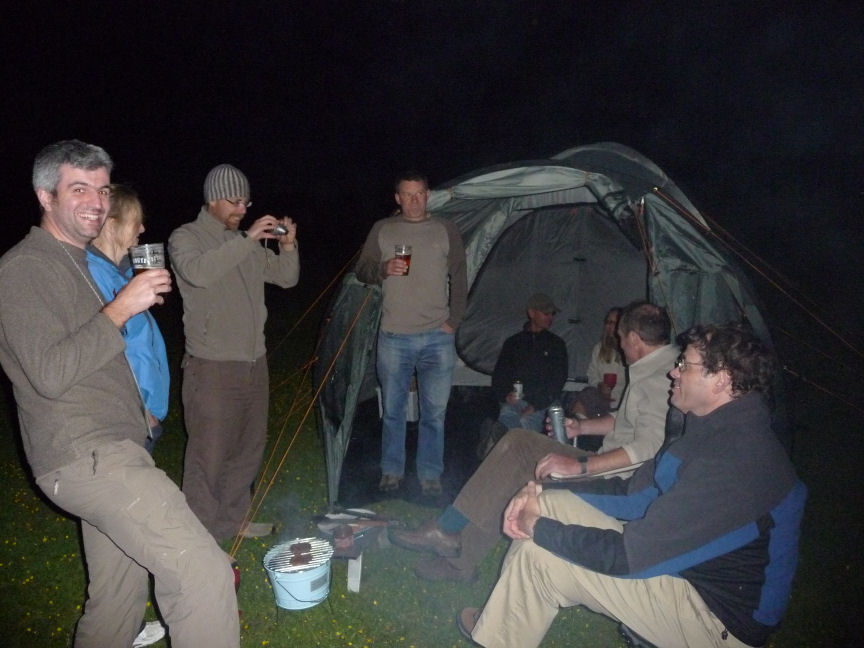 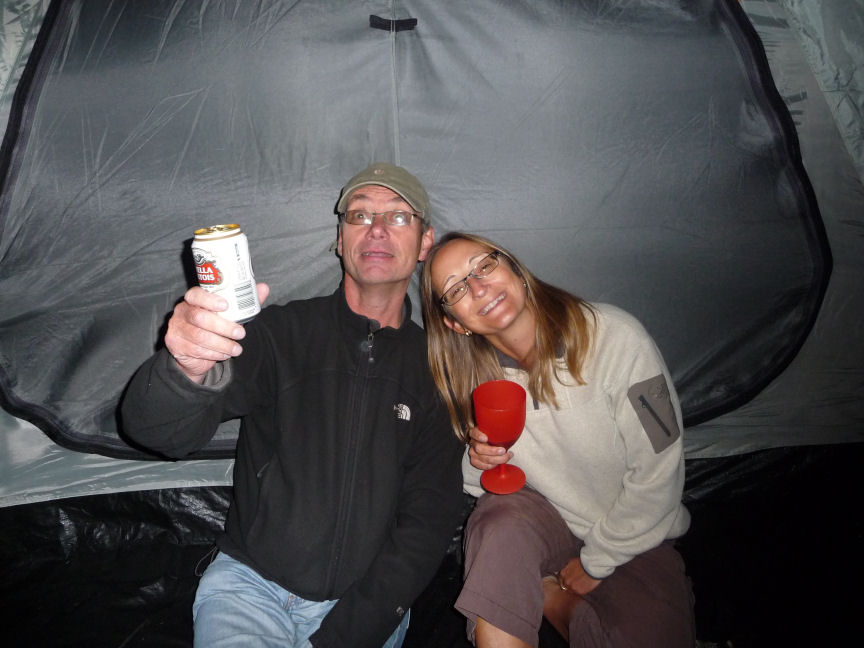 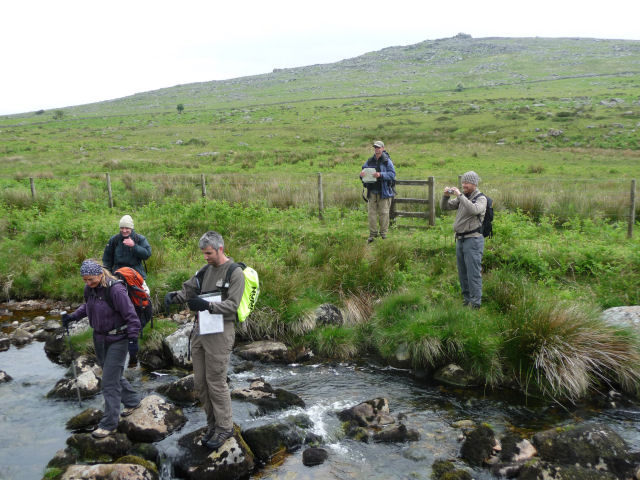 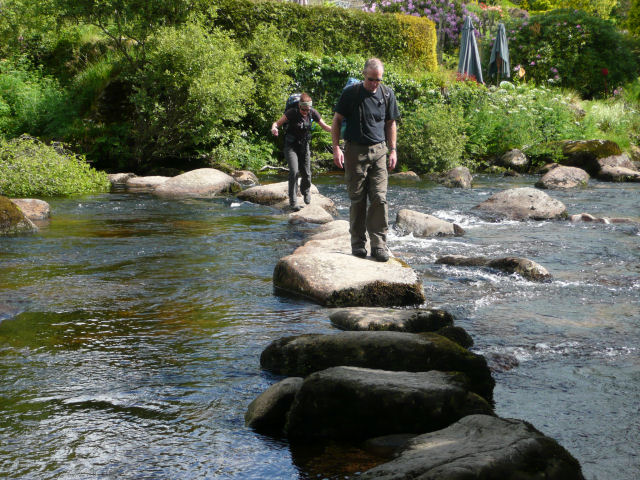 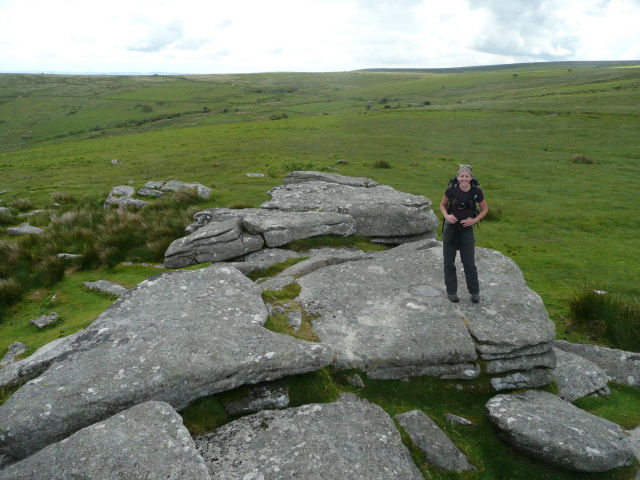 Friday brought the 11 of us together at the Plume of Feathers in Princetown, our base for the weekend. After the initial shock of the rather ‘cosy’ bunkhouse, we all caught up over a few vinos and beers in the pub courtyard before venturing over to the campsite to join Simon H in his new purchase, a huge tent! Although only 10pm, we were disheartened to be told to keep quiet by fellow campers, who were taking part in the ‘Discover Dartmoor Ultra Marathon’ the following day. So, back to the pub we went where we were entertained by a very drunken Jim, who was about to run his 100th marathon!

Saturday we were woken really early by the runners getting ready. The day looked promising, despite weather reports and we were all in a positive mood for the navigation training ahead. At 9.30 we saw the runners set off and we drove to our start point.

Split into two groups (Andrea, Claire, Alan, Simon H, Andy and Mike) and (Dave B, Trudi, Catherine, Simon P and Bob), we set off on our respective routes planning to meet half way for lunch.

The navigation in Andrea’s group started off well until the heavens opened. It was cold, wet and the bag of jelly babies that Mike brought along were proving to be more difficult to eat than setting the compass. It was just miserable! We eventually made it to the half way point, White Tor, to be told that the other group were still miles away. We managed to have lunch behind a boulder and were treated to yet more jelly babies for dessert. Claire rejoiced when Alan finally admitted that the weather was actually appalling and we chose to cut the walk short and head back to the cars, putting our new found navigation skills to the test walking through the fog, bog and streams!

Back at the bunkhouse, we were met by Dave B, who had chosen to walk back ahead of his group and we all had showers and kept the kettle going with endless cups of coffee and tea, as we waited for the other group to return. Whilst sat there, the ultra-marathon runners were already returning and put us to shame when we compared out 6 mile walk to their 32 mile run!! Alan of course was like a cat on a tin roof as England was playing Kazakhstan and he was determined to watch it, so he drove to Tavistock with Claire, whilst the rest of us caught up on the newspapers and said bye to Andy, Mike and the jelly babies as their duties of ‘Navigation mentors’ were over and they had to return to Newbury.

As for the other group, David, Catherine and Sarah had plotted a route that would take them on a 6.5 km hike to rendezvous point of White Tor via Great Mis Tor and the heady heights of Cocks Hill (501m!). Unfortunately Sarah could not make it to Dartmoor but they were joined by Simon and Trudi instead; Bob kindly volunteered to be their mentor. Right from the off the group agreed that they were more interested in practicing their navigation techniques rather than reaching the rendezvous in the shortest time possible. And so spent the next few hours finding ‘aiming off’ points, practicing pacing and allowing Bob to get them deliberately lost so that they could have the fun of trying to get themselves back on track.

The group became so absorbed in their navigation that they lost all track of time until they were informed that we had already arrived at the meeting point and had decided to call it a day. The group however, decided to soldier on and Bob achieved hero status when he produced an 8-man shelter from his rucksack for the lunch stop at the summit of Cocks Hill. This meant lunch was a reasonably pleasant and enjoyable affair, while the shelter took the brunt of the wind and the rain. However, eventually their enthusiasm reached its limit and they too decided to head back. En-route, Bob decided to demonstrate “how not to navigate” by leading everyone straight across a marsh (yes, that’s what the blue squiggly lines mean!). And Catherine found a particularly springy piece of sphagnum moss to bounce up and down on. Most of the time though was spent wading through water which added to the adventure. It really was surprising that the Ultra-marathon runners back at the bunkhouse were not more impressed with our efforts!

Saturday evening we had dinner in the pub, followed by several games of cards, where Alan proved that there is no honour among arseholes and so earned himself his new nickname of Alan “Two aces” Tinkler. As the group retired for the evening, Alan and Andrea decided it was time to put their dance moves to the test and joined the marathon runners’ disco. Songs such as Sweet Home Alabama spring to mind…

Sunday, we were pleasantly surprised to find the sun shining. Up by 9.30am and ready to depart by 10am, the remaining eight of us chose to do different things. Simon P went for a long walk (in preparation for the Pyrenees next month) south of Princetown and Claire, Alan, Simon H, Dave B and Andrea went on a six mile walk from Dartmeet. Claire very kindly led the walk and it proved to be a fabulous day with stunning wild flowers, forests, tors and delicious Devonshire cream teas! Catherine and Trudi decided to have a tourist day and took in the sights of Dartmoor Prison, the Buckfastleigh Butterfly farm and Otter Sanctuary, a pottery studio, had the obligatory cream tea and made it to Hound Tor (of Hound of the Baskervilles fame), before the torrential rain finally drove them out of Devon.

See below for Andy’s video of the navigation session, including proof of just how good we are at river crossings… (3 mins, has sound)