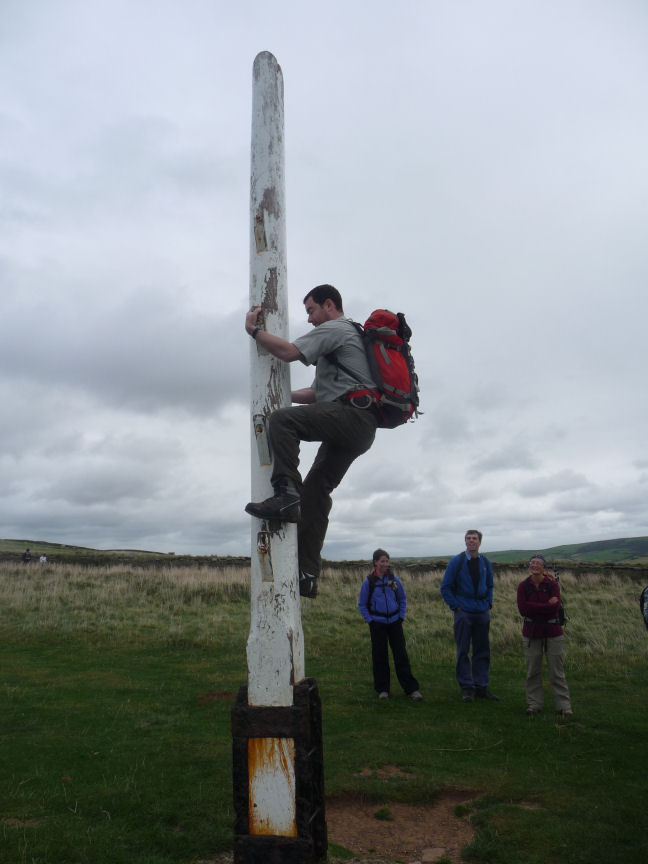 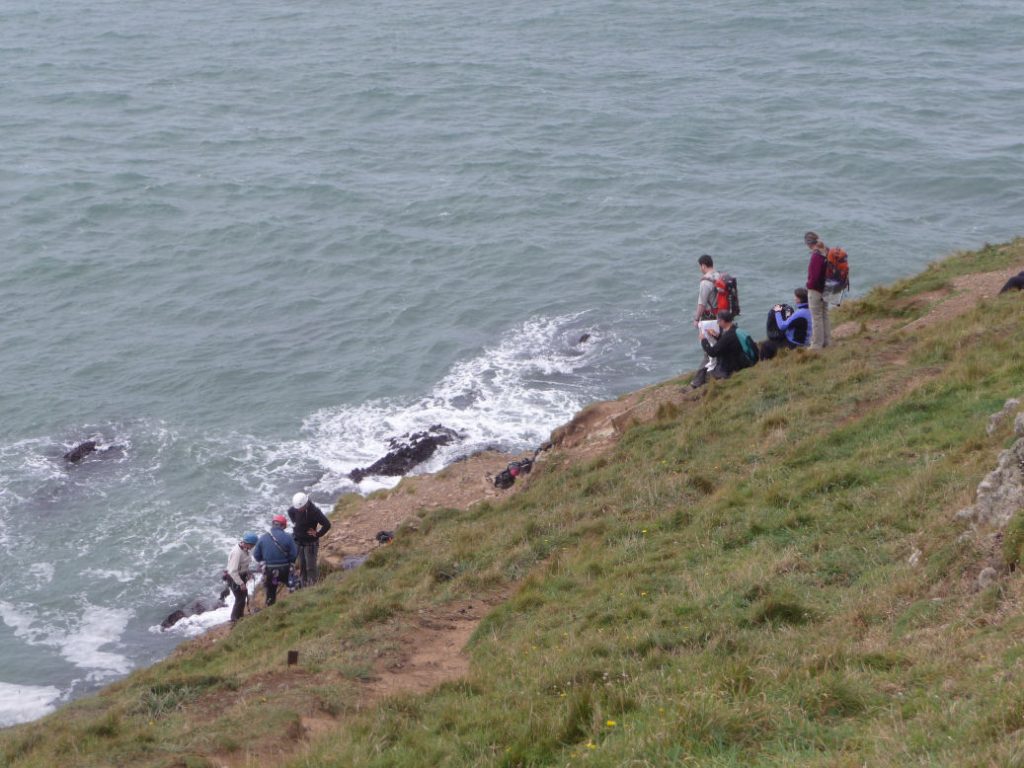 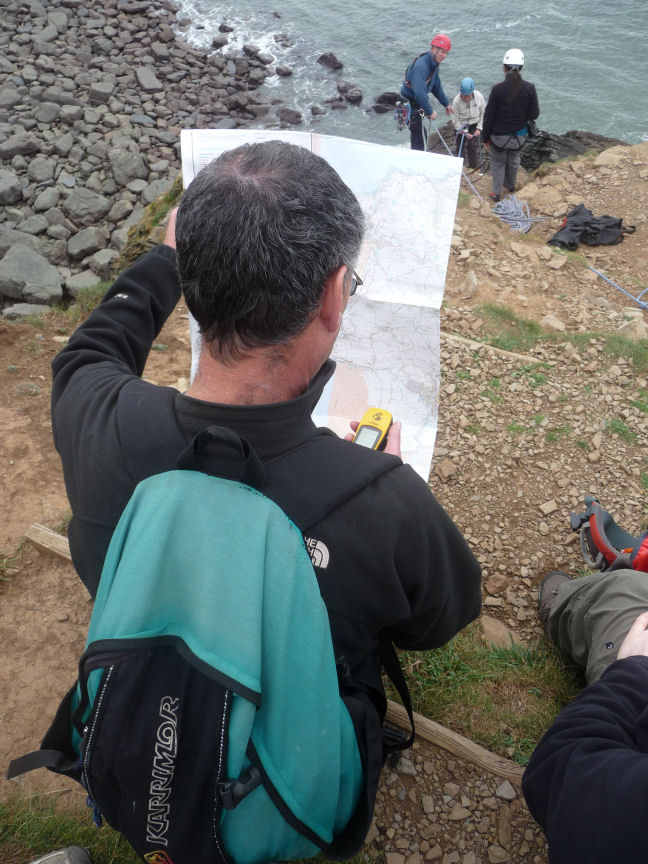 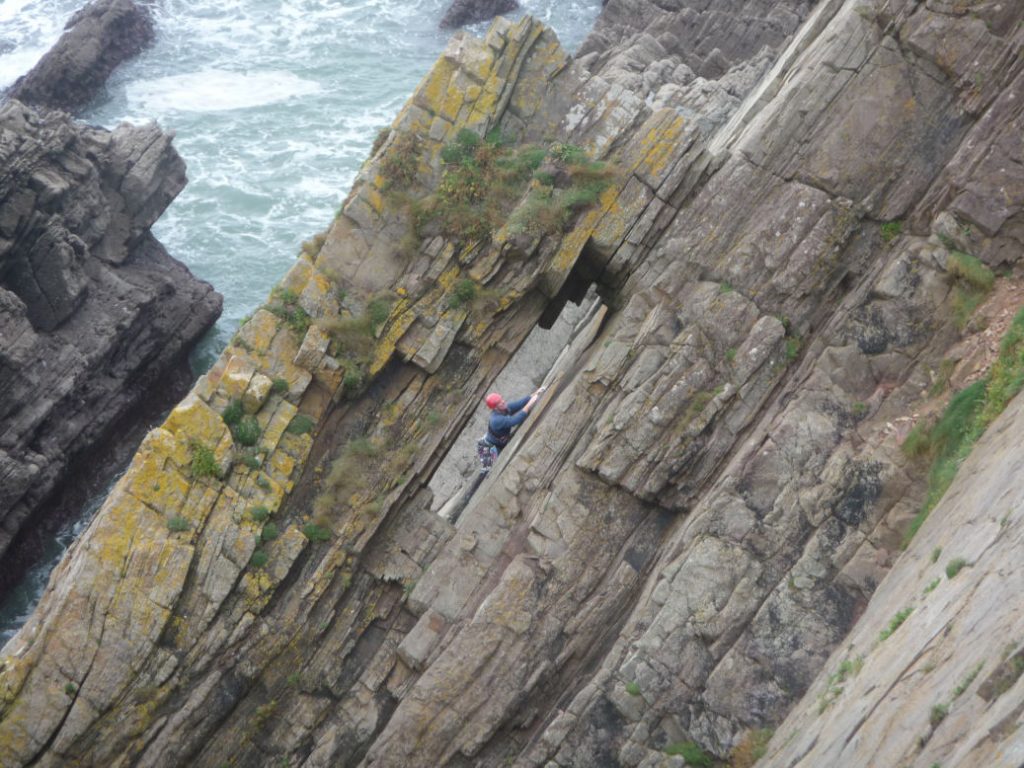 This trip probably deserves the accolade of “fastest to sell out in 2009” – maybe the upgrade from static caravans to cottages shows the accommodation preferences of the Club these days? We arrived to find a selection of stone cottages and wooden lodges – most people convened in the largest lodge for a few drinks, feeling rather as if there should be snowy mountains and ski lifts outside instead of coastal path.

It was a prompt 9.30 start on Saturday morning, as the majority of the group joined Richard to cross several fields and then pick up the coastal path west towards Mortehoe and Woolacombe. The weather couldn’t quite make up its mind: sunshine and showers meant plenty of gear faffs with waterproof jackets. That section of the coast path was popular with charity walkers: we passed, and were passed by, a full set of Reservoir Dogs (or were they the Blues Brothers?) and Scooby Doo. The latter was hailed enthusiastically by a group of excited schoolchildren at Rockham Bay. En route to Morte Point, where we left the coast path and headed inland, Bob’s sharp eyes spotted a few seals trying to camouflage themselves on the rocks below. Maybe they were out of the wind; we certainly weren’t!

After drinks and food for some at a pub in Mortehoe, the group divided: some returned to the coast path and went on to Woolacombe before heading back inland, and the rest skipped the Woolacombe part. The route back included a steep, skiddy downhill into the woods of the Borough Valley, followed by steps to emerge again – Ayla particularly enjoyed those. The first group got back to the farm around 4pm for tea and cake, followed by the rest an hour or so later.

Meanwhile the climbing contingent of Steve C and Paul had a slightly more leisurely start, top-roping on Promontory Slabs at Baggy Point at 4:30pm. This was more or less at high tide, so no ledge to start from…

The evening involved the usual culinary extravaganza, with the inhabitants of each cottage planning and cooking their own meal. There was still plenty of visiting between houses, with sharing of starters being quite popular.

On Sunday there was a variety of activities planned. Bob, Tarinee and Maggie headed for Baggy Point, to abseil off the sea cliff at Promontory Slabs and climb a Severe back up again – a first for Tarinee, who enjoyed the challenge. Steve and Paul did Shangri-la on Long Rock Slab, a little earlier in the day this time. A group of walkers (Alan, Claire, Steve L, Joanne, Sarah, Bruce, Paula, Trudi, Mick and Ange) also parked just outside Croyde and walked to Baggy Point overland via Middleborough Hill and a big post for Mick and Bruce to climb, arriving just in time to encourage Maggie as she started her abseil. It was then back along the coast path for a spell on the beach, ostensibly “helping” Ayla to build a sandcastle but in reality using that as an excuse to build NMC’s answer to St Michael’s Mount. All very well until the tide came in… There was then a cream tea stop before heading for home.