So 2 weeks on from our annual awards night, where we cooed at how stunning Snowdonia looked with blue skies over a white blanket in 2015, we attempted to recreate the scene.
We once again stayed at the Boulder centre in LLanberis, which has all the facilities you could hope for on a weekend away, and the staff are very friendly too.
Well, let’s start with the positives… the roads were empty and all our journeys were fast and furious, which brings me nicely onto the weather. There is a saying that there is no such thing as bad weather, just the wrong equipment. This theory put us all to the test; sticking with positives at this stage, the drying room at Boulder is really good!
Pam and the 2 Dans set off early on Friday and managed to clamber up a couple of windy peaks before we arrived (Moel Eilio and Foel Gron).

On Saturday we set off in 4 different groups aiming to get the best we could from the day. Dave W and Dan U set off first, deciding to tackle a lower mountain and go higher if it wasn’t as bad as forecast. They were able to point the second group of Mark and Pete in the right direction (the Mamil’s were running at this stage). Alan & Claire wisely chose to explore the local mine and museum, whilst the remaining 8 attempted a loop which included Elidir Fawr.
The weather wasn’t very nice at all. Rain was being driven by 70mph winds arriving as a horizontal jet. After 2 hours the larger group had made it up Carnedd Y Filiast. Here the group split in 2 and half journeyed back to the hut, whilst the others continued into the wind across tops to Elidir Fawr, where we didn’t hang around to any photos.

Dan U & Dave arrived at the pub first, having got blown away up Moel Eilio and thought ‘sod this, let’s watch the rugby’… In fact by 3pm almost all the group were in the pub watching the rugby; the main exception being the runners, who made it up and down from Yr Wyddfa to the café at Pen y Pass, having completed many miles and rescued a few poorly equipped walkers. Having failed to get themselves rescued by those in the pub, Pete ran down the road to Llanberis, whilst Mark jumped in a passing Limo (he’s got class).
The whole group assembled in the ‘Heights’ where we had a good meal before early nights.
On Sunday we again set off in 4 groups. The wind was still blasting the mountains but without rain this time. The temperature did drop to just above freezing, bringing us a few other things to think about. Mark and Pete donned their lycra once more and ran from Llanberis to Ogwen, via Elidir Fawr, Y Garn and a few other peaks. They were met at Ogwen by Andy, Dan, Nick, David PJ, Pam and our newest member Ruxi (the Orange Ninja), who’d all climbed up Y Garn via Devil’s Kitchen, then managed another couple of peaks before descending.
Keyna, Dave, Alan & Claire topped Yr Wyddfa, which had an icy glow about it. Strangely it was deserted except for a couple of tourists in designer gear. Their approach from the Pyg track had been screened from the wind; a well-chosen route.
It was Sarah’s turn to escort the Dans around, showing them the Slate mine and a few potential club huts.
Ruxi, our newest member deserves a special mention for blending in so well, her enthusiasm and sense of humour we’re both working well during a testing first trip.
My weekend is summed up by 2 observations: first, the worse the weather got, the happier Pam became! (you should look for the video on our Facebook page dated 8th Feb) and finally, being a bit weather beaten, but not defeated, made the trekking feel more like mountaineering. Please Sir, can we have some more…? 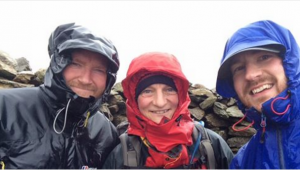 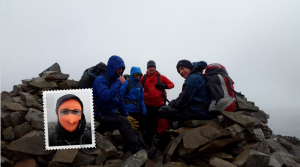